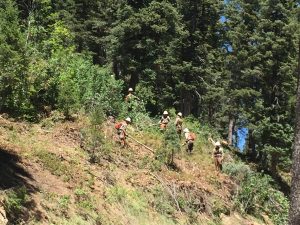 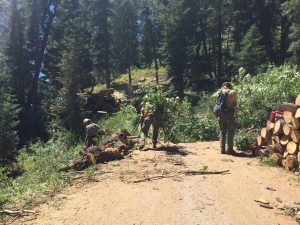 Visitors to Toll Canyon Open Space have likely noticed a change in the vegetation along the Toll Road trail, the paved access to the canyon from St Moritz Terrace.

This summer the Utah Department of Natural Resources Division of Forestry, Fire and State Lands (“FFSL”) partnered with Snyderville Basin Special Recreation District (“Basin Recreation”) and Utah Open Lands (“UOL”) to mitigate the risk and hazard of wildfire in the Toll Canyon Open Space and to secure an emergency egress for Summit Park and Pinebrook neighborhoods. The project, which began in June and will be ongoing until completed this October, is treating an 80-foot corridor of forested open space along the emergency escape route between the two neighborhoods. The FFSL Hot Shot Fire Crews are working as time allows between forest fires, clearing brush and hazardous trees and installing fire “breakaway” gates on either end of the escape route.

This project has been funded by a FFSL Summit County Fire Mitigation Grant. The buffer being created by this project will serve to reduce the volume of surrounding forest vegetation (fuels) that present a fire hazard, while also providing a safe exit in the case of a catastrophic fire to surrounding neighborhoods. It aims to reduce the homeowner’s exposure to wildfire and reduce the potential for fires to start in the treated areas.

FFSL crews will also remove beetle-killed trees and thin dense growing conifers to improve forest health and enhance wildlife habitat in the area. A chipper is being utilized to dispose of the debris and redistribute the residue on the forest floor for recycling. Firewood rounds will be stacked on the road for a community collection, of which many Summit Parkers have taken advantage of… creating backyard furniture and filling wood sheds for winter burning.

Email Jess Kirby at jessica@basinrecreation.org for details on how to collect the free firewood.