Knowing that traffic and speeding cars is a big concern in the neighborhood, the Traffic Calming Committee has been working with the county to get a number of traffic calming efforts implemented.

After a traffic survey was performed early in 2016, it was determined that our neighborhood qualified for calming efforts. That said, Summit Park did not qualify to physically change the road surfaces (e.g., speed bumps, curbs, etc.); instead, we were only allowed to use visual changes (e.g., paint and signs).

Our final proposal was submitted in late March and the county presented their plans to give us sharrows (paint that indicates that drivers should expect to share the street with bicycles and where the bikes should ride) as well as one pedestrian warning sign. Paint and signs were installed in September.

If you have any questions or want to get involved with the Traffic Calming Committee, please email summit.park.roads@gmail.com. 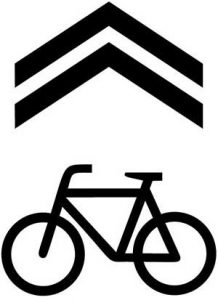 A few points of clarification: The speed survey was performed in the summer of 2015 not 2016. SP may still qualify for physical changes, but the county approaches traffic calming in phases and the first phase is for visual changes only. If the paint and signs fail to meet the county requirements, then they move to physical changes which may include speed bumps, bulb-outs, islands, chicanes and lane narrowing. The paint and signs were scheduled for September, but delay after delay has postponed their implementation.